Build America Bonds are taxable municipal bonds that were introduced as part of the American Recovery and Reinvestment Act (ARRA) signed into law by President Obama in 2009. The purpose of the bonds is to lower the cost of borrowing by state and municipal agencies.

The value of Wenona’s Build America Bonds is $3.5 million.

The City of Wenona has used these funds to complete numerous, much needed projects over the past three years. Projects include: 1st North Street, Walnut Street, South Water Tower, Walnut Street Water Tower, and Water Main Replacements throughout the city. 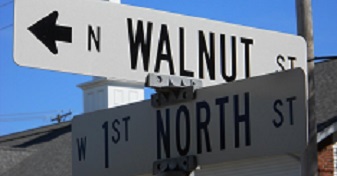 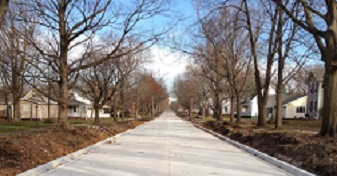 Looking north down Walnut Street from the intersection of 4th South and Walnut Street. Picture taken in November of 2011. 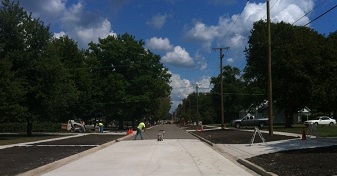 A view from the intersection of First North and Pine Street looking east. The funds for the project came from the Build American Bonds fund. The project was finalized in the middle of September. Picture taken early Summer 2012. 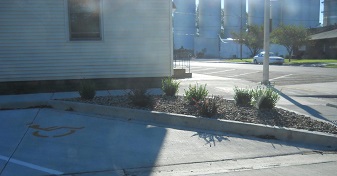 A picture of the new handicap parking to the west of the American Legion Building on Walnut Street. Taken 9/10/12.

Project Summary: The South water tower project consisted of the removal of the lead based paint and sandblasting, priming and painting of both the interior and exterior of the tower. Other miscellaneous improvements were completed during the repairs. The Walnut Street tower project consisted of sandblasting, priming and painting the tank’s interior as well as other miscellaneous maintenance issues that required attention.

The improved roadway is constructed of concrete pavement with new curbing and gutters on both sides of the street. Utility improvements included the replacement of the pre-existing 4″ cast water main with new 6″ PVC mains along the entire street re-construction limits and continued south one block to Fifth South Street. Storm sewer construction/replacement was also part of the project. New valves and water service issues have been addressed in conjunction with the main construction.

Project Summary: The First North Street Roadway project consists of approximately 1,800 feet of total roadway replacement from Walnut Street, west to, and including the Spruce Street intersection. Sidewalk replacement, where necessary, and handi-cap access ramps have also been addressed.

The improved roadway is constructed of concrete pavement with new curb and gutter on both sides of the street. Utility imporvements included the replacement of the pre-existing 4″ cast water main with approximately 2,100 feet of new 6″ and 8″ PVC mains. Approximately 3,200 feet of new storm sewer has been constructed from Walnut Street to a tributary of Sandy Creek just east of Maple Street. Sanitary sewer improvements consist of the replacement of 450 feet of 15″ main from alley to alley east and west of the Hickory Street intersection. All utility improvements included related manholes, inlets, catch basins, valves and services.

Project Summary: This project consisted of the replacement of the old cast mains with a combination of approximately 220 foot of new 6″ and 1,520 foot 8″ PVC mains to improve circulation and fire protection within the system. This project also included all related valves, services and hydrants.

Project Summary: Removal and replacement of the existing culverts and the portions of roadway which would be effected by the project limits. The type and size of culvert will be determined at time of final